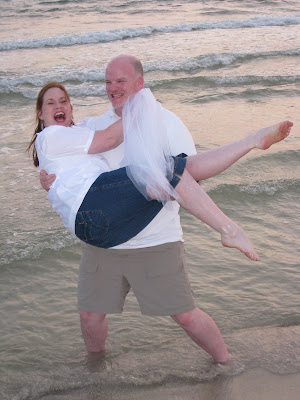 As I'm virtually on the eve of beginning the fall semester at Dallas Theological Seminary, I thought it was time to update the old blog and give y'all a glimpse into the comings and goings in Allison's and my life over the past several months.

I'll start with the seminary update: I have now completed 59 of the 120 units (yes, 120 units is an extreme number for a Master's degree) required to complete my ThM in Bible Exposition and Pastoral Ministries at DTS. Whew!!! So far I've somehow been able to keep a good GPA in spite of working 30+ hours per week in addition to full-time seminary. As I tell some people who ask how I do it, I've learned that sleep in actually an optional activity. ;-) Should all go according to plan, I am hoping to graduate in the spring or summer of 2011....but that will involve taking a couple of summer courses in addition to a couple of winter session courses in addition to maintaining 12 units per semester. It has been very challenging, but I'm thankful for the opportunity and for God's continued provision.

After last year's hodge-podge of jobs, I have managed to keep it down to just 3 jobs thus far this year. I began 2009 working about 20 hours per week as a math tutor/teacher at the Quest Academy in a rough part of Dallas. I'm thankful that God gave me the opportunity to work there and to be a witness, but I have to admit that it was a pretty stressful job with mostly unmotivated and disrespectful students where I spent a lot more time trying to keep order in the classroom than actually teaching. My contract expired at the end of April, and I won't be returning this year. I began 2009 teaching English as a Second Language (ESL) in the evenings at the Elite Language Institute, about 14 hours per week. This is a very low-stress teaching position, especially compared to my time at Quest. At the beginning of May I began teaching here in the mornings as well as the evenings (Monday-Thursday), which works out to 32 hours per week, and I'll be continuing teaching here this fall. I had also been servicing DVD rental kiosks for DVDXpress, a competitor to RedBox, one afternoon a week. This was a definite financial boon, because I made $100 per week for only 4-5 hours of work. Unfortunately, DVDXpress was purchased by Coinstar about a year ago, and Coinstar also purchased RedBox a couple of months ago....and I was terminated by RedBox via e-mail last week....bummer! We're trying to determine whether or not we need to replace that income or if we can get by without it....

Allison is continuing to teach drama / musical theater and Bible at Covenant Christian Academy in Colleyville. She continues to greatly enjoy her time and ministry there--especially producing their annual musical in the spring and teaching the senior girls. Her musical in March was Thoroughly Modern Millie, and it was fantastic! She actually started teaching this week--her school starts very early (and gets out early as well)!

We were able to do a bit of traveling so far this year. Over Martin Luther King Jr.'s birthday weekend in January we traveled down to New Braunfels, which is just north of San Antonio, where we spent a wonderful weekend with the Montgomery clan: Matt, Rachel, Joel, Josh, and Hannah. 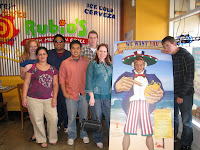 At the end of May one of Allison's best friends, Stephanie Childs, flew her out to spend several days in the San Fernando Valley, where she enjoyed connecting with a bunch of her old friends and former students. 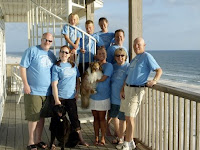 In June we loaded up our van and Hershey and drove down to Cape San Blas, Florida, where we joined Allison's family for a week in a three story beachhouse celebrating her folks 50th anniversary (2 years early). It was a week filled with relaxation, fun, and family, highlighted by her folks renewing their vows on the beach one evening. Just last week we flew out to Northern California, where we were able to spend a few days with my mom and brother and to visit a plethora of old friends at Santa Rosa Bible Church. Allison had to fly back to Dallas on Monday to start school while I traveled up to Mount Hope Bible Camp where I spoke at the high school camp for the Chinese Bible Mission of Northern California.

I had a great time sharing several messages on the topic of Following Jesus to almost 200 campers and staff throughout the week (Note: I am in the process of uploading videos of those messages on my Picasa site - http://picasaweb.google.com/youthherder/CBMCampVideos#). After camp concluded on Saturday afternoon, I spent another night with my mom and brother and took my mom to the Sunday morning service at the Union Baptist Church in Rio Vista before boarding a plane back to Dallas. 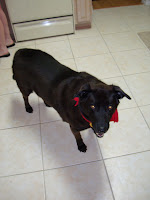 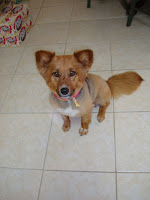 On the family front, Allison and I decided it was time to add another member to the Peterson family, so we adopted Toffee in July. Toffee is a Sheltie / Shepherd mix who brings a lot of excitement (in both good and bad ways) to our home and is helping to keep Hershey feeling young. On a more serious family note, my dad's lone surviving brother, Uncle Ed, passed away early in August....as far as we know without Christ.....

We have also been coming to grips with infertility--apart from a special work of God, we will never have children. As a result, we sent in our application to the Texas Children in Waiting program through Buckner International a few weeks ago, a program that seeks adoptive homes for some 6,000 children that are currently in foster care throughout the state. Traditional adoption of babies and infants, whether foreign or domestic, is incredibly expensive (over $20,000), but this program is essentially free. We are open to adopting children up to their teens and to adopting siblings, so Lord willing we will adopt one, two, or perhaps three children in the next year...a proposition that is both exciting and scary at the same time.

I have continued to submit my resume and apply to a number of churches throughout the Dallas area, but God has not yet opened a door for me to serve. We continue to ask that God would open a door for that service.

That's about it for this update.

Following Christ,
Kevin & Allison Peterson
(& Hershey & Toffee)
Posted by Kevin Peterson at 7:56 AM No comments: Links to this post

Why are you cast down, o my soul, and why are you in turmoil within me?
Hope in God; for I shall again praise Him, my Salvation and my God.
(Psalm 42:5 - ESV)
Here we are, so quickly entered into 2009....wow! What a year it has been for us here in Dallas--a year marked by discouragement... Read on to see... 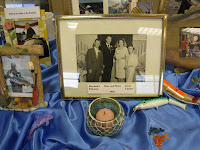 Allison and I began 2008 in California, spending time with my mom and brother after my dad passed away on December 29. The joy of that was being with family in a time of tremendous sorrow and having my dad make a profession of faith just days before he died. A few days later I performed his memorial and we returned to Texas. 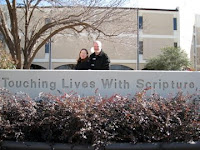 I continued my studies in the spring and fall at Dallas Theological Seminary, where I'm enrolled in what seems to be a lifelong program of studies (120 semester units to earn a ThM in Bible Exposition and Pastoral Ministries--out of which I have now completed 37 units). I still enjoy my studies, but feel buried by the workload...especially since I've been working about 35 hours / week this fall. Thankfully, God provided a scholarship for me for the 2008/2009 year! Allison and I are still leading a Spiritual Formation group through the Seminary and are thankful for the support they have been this year. 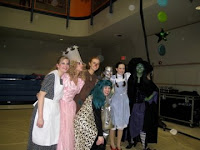 Allison continues teaching junior high and high school drama & musical theater in addition to teaching high school girls' Bible at the Covenant Christian Academy in Colleyville. She had three tremendous productions over the course of this year: Wizard of Oz, Our Town, and Just So Stories. She's now preparing for Thoroughly Modern Millie, which will show in March.

I had an interesting work year... I tutored (actually taught) math three days a week in the spring and fall of the year at Quest Academy, a charter school in the middle of Oak Cliff (inner city Dallas). It's been interesting, to say the least... I struggled to find work once DTS got out in May, and ended up working a variety of jobs--mostly bad! For 6 weeks I touched up cars on used car lots under the hot Dallas sun for about $8 / hour. I then was a courier for 4 weeks at US Courier, making $5 - $10 hour after paying for gas. I also merchandised magazines and books at 2 Home Depots for most of the summer and fall. In July I was hired to teach ESL (English as a Second Language) at a school that caters to Korean students, teaching just nights at first before teaching full-time for the final 3 weeks of the summer. This was far and away my best job of the year! I'm still teaching here (www.elidallas.com) 4 nights a week. I also have been tutoring a Belgian family (mom and 3 children) in English since August, and returned in September to tutor / teach at Quest once again. I also picked up a very easy job servicing DVDXpress kiosks (a dvd vending machine placed in supermarkets) in August, starting with just 1 kiosk, but am now servicing 4 of them. 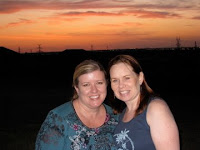 Allison and I didn't travel too much this year, but we did enjoy visits from several friends and family this past year, including Allison's mom for Oz, and Wayne Harder, Jimetta Mayne, Cindy Kelly, & Laurie Samaan for different conferences here in Dallas. We also enjoyed a special visit from my old roommate and his wife in July, James & Heather Kliewer. We came back from California just a few days into the new year. In May we went to St. Louis to spend a long weekend with Allison's family at her brother's house, taking in dance recitals, hockey games, etc. I took Allison for a weekend in San Antonio in August compliments of credit card reward points. And 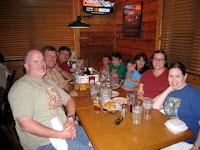 we returned to St. Louis for Thanksgiving as well, but stayed home in Dallas for Christmas -- which was my first Christmas in all of my 43 years to not be with my family.... 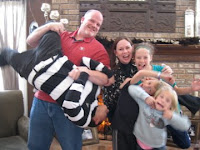 We were blessed to spend the day with the Montgomerys, who have been incredible friends over most of my lifetime!

2008 was a year marked by discouragement. We began the year mourning my father's death, which took much longer to heal from than I had imagined. We also had our second break-in in May, but thankfully our burglar alarm scared them off before they could find anything valuable. We also faced financial struggles, especially as I flailed around at low-paying jobs this summer and faced some medical expenses at the end of the summer and seminary expenses in the fall.

But our biggest discouragements have come from two other sources: (1) Allison and I have been trying to have children for over 2 years now, unsuccessfully. We did some tests at the end of the summer (which insurance refused to pay for) that hinted that God would have to work in nearly miraculous ways for us to ever have children of our own. (2) I have now sent in my resume to over 70 churches in the DFW area that were/are hiring for youth/music/miscellaneous ministry positions. Despite interviewing at 6 of those churches, I am still looking...

We are looking forward to 2009, and are hopefully awaiting the unfolding of God's plan in our lives throughout the course of the year. We would greatly appreciate your prayers and continued friendship throughout it as well.